K9s For Warriors Retrieves Bronze at the DMAW MAXI Awards

K9s For Warriors, alongside their agency partner TrueSense Marketing, was best in show at last week’s DMAW MAXI Awards. 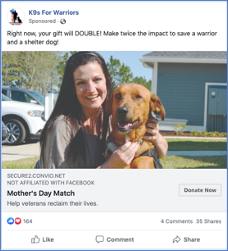 When you think of holidays that invoke a sense of generosity and motivate donors to give, Mother’s Day probably doesn’t come to mind. K9s For Warriors had experienced some donor acquisition success on this greeting card holiday by showcasing their founder, who is a mother of a veteran suffering from PTSD.

The founder is no longer a part of the organization, so TrueSense Marketing had to find an equally powerful story to not lose the revenue K9s For Warriors typically enjoyed in May.

We highlighted a warrior mom throughout the campaign. Also, the campaign included a 2x match, which is always a strong direct response strategy to motivate donors to give.

In total, the multichannel Mother’s Day fundraising campaign raised more than double than it had the year prior. Congratulations, K9s For Warriors!