If you planted a few grape vines in your backyard today, you would have wine-ready grapes three years from now. And the really, really good fruit comes from “old vines” — a long time down the road. Plant now, harvest later.

The same goes for your donor file. A donor’s “vintage” becomes more and more valuable the longer their giving history is with you. They become more invested in you and your cause, their loyalty strengthens, and their giving level increases. But, unlike grape vines, not all donors take root initially. About one-third of the donors you acquire (plant) will give again the next year. And, of that group, maybe two-thirds will give in their third year. Each year after that, their roots are solid and they are likely to keep giving. But all donors do stop over time. And when an “old vine” valuable donor is lost, it takes many “new” donors to replace her. You can’t wait until that loss hits to kick in and do more planting through acquisition. Remember: It takes new donors several years to bear real fruit.

Planting and cultivating must happen continually. If you skip the planting, you’ll save yourself some investment today … but then suffer some dry years ahead.

Maybe you can relate to a conversation like this in annual budgeting time:

Board members: “This income line from direct mail looks great, but why does it cost so much?”

Executive Director: “A big portion of the expense is for new donor acquisition.”

Board members: “We’ve been acquiring new donors for years — we should be able to take a break at this point. Cut it in half for now until we get through some of these other investments we need to make.”

So, how do you quantify the long-term impact of a possible acquisition budget cut in a way that informs decision making?

We use a scenario-building tool as part of our Donor Health Index. Here’s an example, using that tool:

For the “Continuation” scenario, we assume that this client continues doing the same amount of new donor acquisition and all retention metrics in the most recent full fiscal year hold the same for future years.

For the “Budget Cut” scenario, we hold retention metrics the same, as well … BUT we cut the amount of new donor acquisition investment by 60%.

Net revenue increases with the Budget Cut scenario in the first two years since they are spending less and their previously “planted” donors are bearing fruit.

Then, it changes. In the third year, they get to the point where the reduced number of new donors has led to fewer multi-year donors. They’re not covering their donor losses with donor wins, and revenue begins a steady descent. (Check out the 3 Steps to Growth Planning.)

New donors provide revenue for a long time. This is the same client, which shows the annual revenue from the new donors they acquired before 2014. Many of the donors acquired long ago are still donating — nearly a million dollars in 2018. If they had cut acquisition 10 years ago, they would be missing that revenue today. 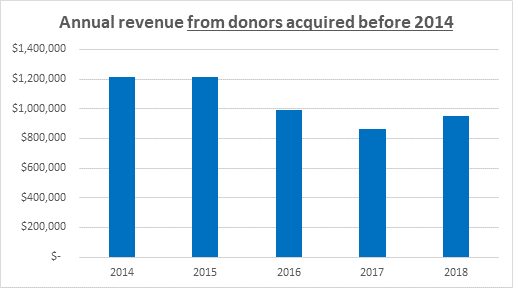 Here are the 5 steps to do this on your own and make your case for donor acquisition:

Once a decision is made to cut acquisition, the only way to turn it around is to restart the planting process right away. But remember, it will be years before there’s a replenishment of fruit to toast to!