New Donors: What Do You Do With Them Now?

An influx of new donors is that first step toward restoring file health and building long-term relationships with donors.  Expanding acquisition and multi-year lapsed reactivation are the first steps in your growth strategy.  These two elements are part of the WIN strategy.

Because it takes 12 to 18 months to recover the money you invested in acquisition, two other strategies are a priority immediately after an acquisition campaign: KEEP & LIFT.

In an analysis of acquisition donors across The Salvation Army, the most immediate indicator of long-term retention is gift frequency.  The groups of new donors with the strongest retention give two or more gifts within their first year, and it’s a pattern that continues as they move into the 2nd Year New and Multi-Year donor life cycles.

That is why it’s critical to quickly record, acknowledge, and engage the donor after an acquisition campaign.  In your Donor Health Index, we monitor second-gift conversion by new donors because it’s such an important metric.

For The Salvation Army, since 90 percent of acquisition happens between October and December, one of the biggest challenges to second-gift conversion you face is delays in processing and recording gifts — causing many new donors to only receive their first appeal in January.  For donors with gifts in October who are high-frequency donors, a delay of 2 to 4 months in engagement represents a significant loss in both income and a possible impact on retention.

Acknowledging and appreciating the new donor is also critical to retention.  Since the majority of donors give to multiple charities, it’s important to distinguish The Salvation Army from its nonprofit competitors.  You should call and send personal thank-you cards to all new donors, so that The Salvation Army stands out among its competitors.

You should also use the telephone with new donors, because you want to introduce multiple channels of communication as early as possible in the relationship — which helps set the stage for future sustainer offers, major giving, and planned-giving engagement. 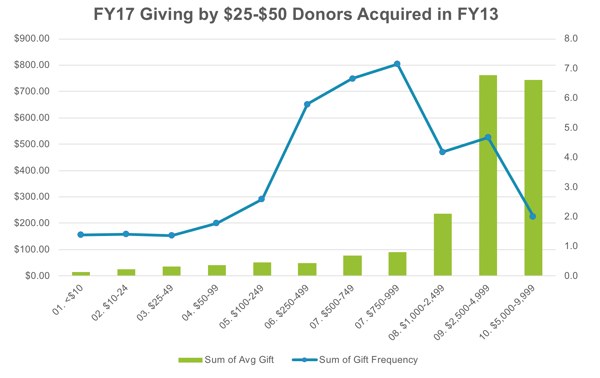 Increases in average gift after acquisition are more gradual, with more significant increases in giving happening when a donor moves into the Multi-Year Donor life cycle.

It seems that many donors are more likely to add a gift at first instead of increasing the size of the individual gift.  This is why a range of sustainer offers are an important element in new-donor engagement.  The range of donor preference for frequency and gift size is also why you should use a donor-choice model for sustainer giving that engages the donor around both frequency and gift size.  While it takes a while for average gift size to accelerate, it eventually takes on more significance than frequency, and you want to maintain an adaptability to match the changing giving patterns for donors who are building a strong giving relationship with The Salvation Army.

There is a final strategic focus that you should adopt.  It’s as much a shift in perspective for you as it is for the donor.  New donors are not just a source of revenue.  Rather, they represent a relationship focused on having an impact in the community.  They represent a potential advocate, volunteer, in-kind donor, and planned-giving opportunity.

They are an addition to, as your mission statement defines, the “… international movement, [The Salvation Army] is an evangelical part of the universal Christian church.  Its message is based on the Bible.  Its ministry is motivated by the love of God.  Its mission is to preach the gospel of Jesus Christ and to meet human needs in His name without discrimination.”